Our venue is currently closed. Click here to find out why >>

Hertford Theatre is not currently presenting productions as we undergo our redevelopment and transformation.
We are due to re-open late 2023. Watch this space!

East Herts District Council have issued the following statement:
"Full Council approved the revised budget of £24million on 1 March 2022. Responses to tender invitation have been received and we are now in the evaluation and moderation process. Subject to the evaluation outcome and approval process, a decision on award of contract is scheduled to be made in March."

East Herts District Council have issued the following statement:
"Responses to tender invitation have been received. There now follows an evaluation and moderation process.
Subject to the evaluation outcome and approval process, a decision on award of contract is scheduled to be made in early March."

We've closed our doors to the public and emptied the building.
There are many aspects to our project, which we start to explore over on our Youtube channel (This link will take you away from this website).
In our first video, we introduce some of the exciting changes that you can look forward to.

We've also begun our Royal Opera House Bridge project to help us develop our future learning offer to schools throughout East Herts and put down the roots for the creation of a new education and outreach department within Hertford Theatre.

You can find out more about the project on our Schools and Learning page.

The plans for the Growth and Legacy Project at Hertford Theatre were approved last night by East Herts Council’s Development Management Committee.

Hertford Theatre will be redeveloped with an investment of £19.9m, which will enable first release cinema to be screened across three bespoke cinema screens, a brand new studio auditorium for smaller live acts and performances, a plaza-style foyer with riverside café-bar and increased main auditorium space for larger productions.

The Growth & Legacy scheme will make Hertford Theatre a beacon of sustainability for the County and also across the national arts sector.

Improved integration with the surrounding historical area will uncover the Motte and allow our community to understand the local history, along with two hireable community spaces and improved access to all areas of the building.

Rhys Thomas, director of Hertford Theatre said, “Throughout the health crisis over the last year, the one thing that has been even more crucial and evident is a need to hold on to a sense of community. The improvement works will ensure that Hertford Theatre can meet demand and will sustainably stand the test of time.

“The theatre is such a hub, in the middle of Hertford town and so well used by many community groups. The new opportunities and the emphasis on sustainability that the Growth and Legacy Project will bring are going to be exciting to watch take shape.”

The theatre will close to the public from Monday 7th June 2021 in preparation for works to commence in the summer/autumn. The next stage of the project is appointing a main contractor.

For more information see the East Herts District Council webpage on the theatre development. (This link will take you away from this website).

Have your say on the proposals!
September 2020

We held a consultation period so local residents and those interested could have their say on the proposals to transform Hertford Theatre into a place that will enhance the lives of visitors and the town itself.

Watch the video below to see and hear a little about what the theatre could look like and meet the project team.

Paper copies can be made available on request by calling 01279 655261 or email growthandlegacy@eastherts.gov.uk

The consultation closed on Monday 28 September 2020. 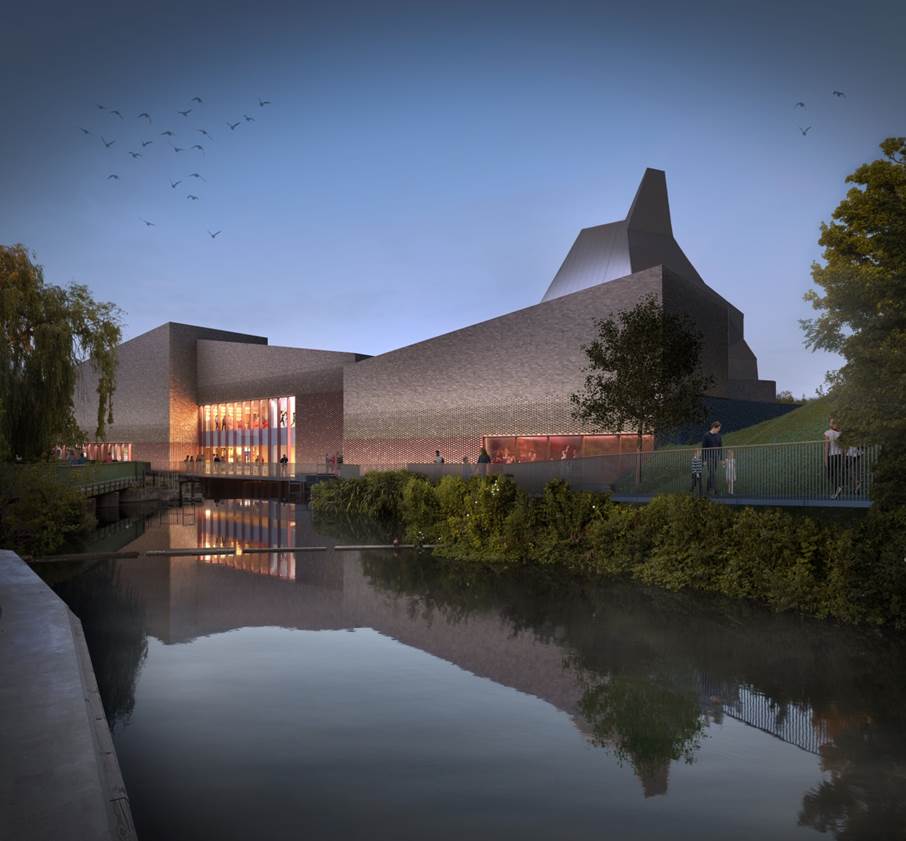 We'd love to hear your thoughts about our project.
Please contact us on email growthandlegacy@eastherts.gov.uk

The additional £6.4mn for the Hertford Theatre expansion was agreed at Full Council last night.

This extra money forms part of the overall £19.9mn budget to deliver the exciting plans for redevelopment, which include:

The Hertford Theatre development project is being funded in full by Public Works Loan Board lending, which will, in turn, be repaid in full over a 30 year period.

On opening, the new Hertford Theatre will become self-sustaining.
Not only will it provide a legacy income for the Council but it will contribute positively to the wider day and night time Hertford economy.

The first act in the exciting redevelopment and expansion of Hertford Theatre is underway.

On Sunday 17th November in the River Room at Hertford Theatre, members of the public were able to attend a drop-in event, where they were able to view the current proposed plans and meet the team and architects delivering them.

Eric Buckmaster, executive member for wellbeing, said:
"We are delighted to be able to make such a huge investment in our already very successful theatre in Hertford. Hertford Theatre is a vibrant, focal point of the town and this expansion will allow us to provide an even better offering for our visitors."

The team has also held events with key users and potential users of the theatre and, after taking everyone's comments into consideration, the council hopes to submit a planning application later this year.
As part of that process, there will be a formal consultation when people will be able to comment on the final plans.

We are delighted to let you know that Bennetts Associates have been appointed as the architects to transform Hertford Theatre. The scene is now set for one of the most exciting performances to be hosted by Hertford Theatre – its £13.5m expansion over the next three years.

Bennetts Associates were appointed after a comprehensive tender process that attracted bids from across Europe. They are design leaders in their field, having worked on some amazing cultural buildings throughout the UK including Storyhouse in Chester, The Royal Shakespeare Theatre in Stratford-upon-Avon, Hampstead Theatre in London and The Kings Theatre, Edinburgh.

The remarkable Growth and Legacy scheme will deliver:

•             An improved riverside café-bar for theatre visitors and people enjoying the park.

Bennetts Associates will develop a design and costings which will be submitted for planning permission later in 2020. But before that happens, there will be a full programme of consultation opportunities for people to comment on the proposals.

Eric Buckmaster, executive member for wellbeing, said: "I'm delighted that we have appointed a leader in the field, Bennetts Architects, who will be working with us on our wide-reaching ideas for Hertford Theatre. The theatre has become a cultural and social hub for the town and this project will build on that position, ensuring that it remains exciting and relevant for its growing audience. It will also allow it to continue as a major draw for visitors from out of town who love theatre, film and live performances, bringing benefits to the wider economy as well."

Rhys Thomas, director of Hertford Theatre, said: “This is a really exciting time for the theatre and our audiences. The story of Hertford Theatre is remarkable and the team are looking forward to working with the architects to further develop this special building for the people of Hertford, East Herts and beyond.”

Simon Erridge, director at Bennetts Associates, said: “We’re really looking forward to working with the team at East Herts, and also engaging with the people of Hertford as we develop our design proposals in the coming months. The beautiful riverside site will be transformed to create a new building that will become the social and cultural heart of the town. We recognise the significance of this project, and the enormous potential for it to make a positive impact on the identity of the town and the wellbeing of its communities.”

Already receive emails from us? Update your email preferences to include news about our exciting Growth and Legacy developments!

Exciting times! Hertford Theatre is going to be transformed!
July 2018

East Herts Council have agreed to invest in the future of Hertford Theatre, transforming it into a place that will enhance the lives of visitors and the town itself, creating a fantastic arts centre in the heart of the county town.

The £13.5m investment would enable the centre to include:

·         Uncovering the 12th-century motte at the back of the theatre which people can reach directly from The Wash, creating an exciting link between the theatre, Castle Gardens and Hertford Castle.

·         An improved riverside café-bar for both theatre visitors and people enjoying the park and Castle Gardens.

·         Improved access to all areas of the building so that artists can better reach the stage, backstage and the dressing rooms.

Eric Buckmaster, executive member for health and wellbeing, said:  "In the last eight years, Hertford Theatre has proved itself to be central to Hertford life. It's a place where those who live in and around the town go, sometimes to be entertained and sometimes to be challenged. We have a rare opportunity to facilitate a step-change, to radically improve a significant asset in the town while at the same time releasing a hidden part of Hertford's history and unlocking a compelling, cultural and heritage offer that will resonate far into the future. The commitment that councillors made has started us on the road towards an arts centre that will transform the cultural life of Hertford in a way that will benefit everyone who lives in or visits the town."


As you can imagine, we're excited about the future and we're working hard with lots of different people, companies and organisations to ensure the success of this project!
We'll keep this page updated with information when there's news.