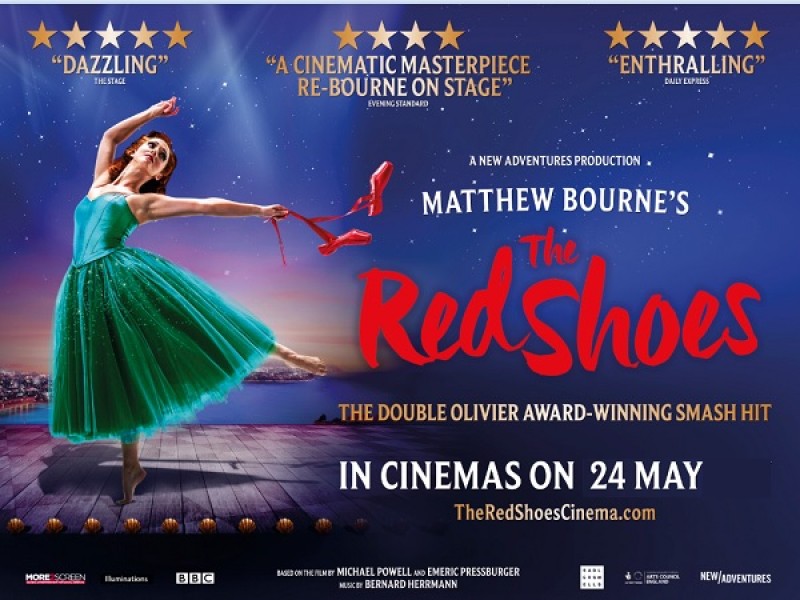 Unfortunately, this event has now been cancelled. All ticket holders have been contacted by our Box Office.
Following Government guidance we are extending the closure period for Hertford Theatre to the 30th June 2020.
Find out more info by clicking here.

We’ve launched our #HugHertfordTheatre campaign and have been so impressed and touched at how everyone has responded.
We’d love for you all to be involved!
Find out more and how you can join in by clicking here.

Matthew Bourne’s ‘gorgeous take on the film classic’ (★★★★ The Times) comes to cinemas for the first time.

Winner of two Olivier Awards, The Red Shoes is an ‘utterly enthralling’ (★★★★★ Daily Express) tale of obsession, possession and one girl's dream to be the greatest dancer in the world.
Victoria Page lives to dance but her ambitions become a battleground between the two men who inspire her passion.

Matthew Bourne’s magical adaptation of the classic Powell and Pressburger film is set to the achingly romantic music of golden-age Hollywood composer Bernard Herrmann, the production is orchestrated by Terry Davies, with stunning designs by Lez Brotherston, lighting by Paule Constable, sound by Paul Groothuis and projection design by Duncan McLean.

This ‘cinematic masterpiece re-Bourne on stage’ (★★★★ Evening Standard) will dazzle your senses and break your heart.

All tickets include a £1.50 booking fee. There is an additional charge of £1 for postage.

Are you a wheelchair user or do you have limited mobility?

Please contact the box office in advance on 01992 531500 who will arrange seating for you and book your tickets.