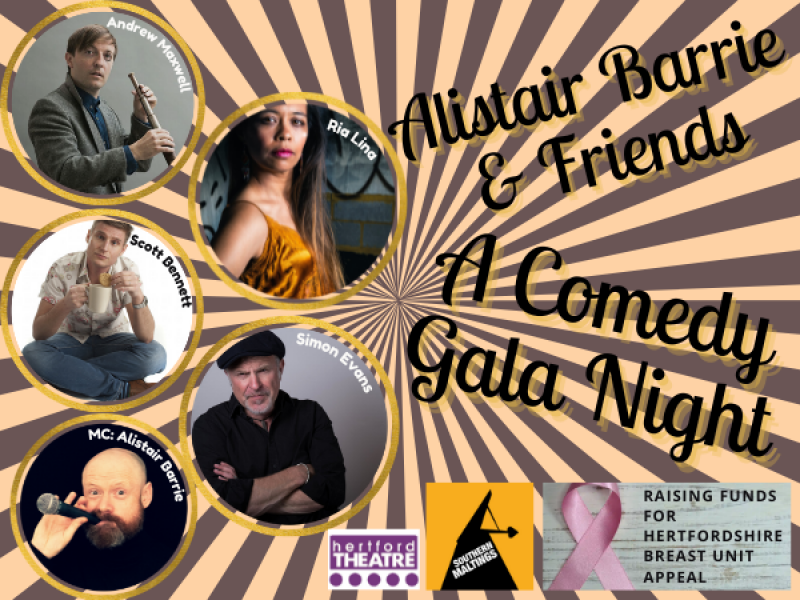 Unfortunately, for this event, there is no step-free access. However, if you wish to purchase tickets and need to discuss accessibility requirements, please contact box.office@hertfordtheatre.com at least 72hrs before 22nd December.

Andrew Maxwell
“…a master-class in mirth. Sublime timing, relaxed delivery style, killer punch-lines: the holy trinity of stand-up are all present and correct. Go see a craftsman at work” - Herald *****
Andrew is the recognisable voice of MTV’s hit show "Ex on the Beach" and on Radio 4 as the host of Andrew Maxwell’s Public Enemies and as a regular on R4’s News Quiz.
In 2019 he took part in I'm a Celebrity...Get Me Out of Here! and he also won Celebrity Mastermind with the specialist subject of Lebanon (which he knew nothing about 6 months before the recording).
As seen on Live At The Apollo (BBC One), Have I Got News For You (BBC One), Celebrity Juice (ITV2) and Mock The Week (BBC Two).
(andrewmaxwellontour.com)

Simon Evans
“an evil delight” Chortle
Simon Evans is one of the UK’s most respected and best-loved comedians. Familiar from TV and radio appearances, as well as for his live tour shows and festival appearances, he is particularly popular on the corporate and after-dinner circuit. On BBC Radio 4, his series Simon Evans Goes To Market, has had five seasons, delighting audiences with his witty and insightful take on the comedically unpromising territory of economics.
(thesimonevans.com)

Scott Bennett
'Great material, great delivery, a very funny man'  Rob Brydon
Scott has appeared on BBC Radio 4’s The News Quiz, The Now Show, The Likely Dads and Elephant in the Room with Sarah Millican, The Summer Festival with Daliso Chaponda, The Comedy Club with Arthur Smith, and Knock Knock with Helen Lederer.
He's been a support act for Rob Brydon and Michael McIntyre, as well as being a programme associate on First and Last with Jason Manford for BBC One, a writer for The Chris Ramsey Show on Comedy Central. He’s written stand-up for big touring acts including Jason Manford and Rob Brydon and has worked extensively for BBC Radio 4.
(scottbennettcomedy.co.uk)

Ria Lina
‘Fearless, provocative and very funny'  Scotsman
Ria is the only Filipina comedian in British stand-up and has a BSc in Experimental Pathology, an MSc in Forensic Science and a PhD in Virology under her belt, so it’s not only Ria’s comedy that’s highly intelligent.
A regular pundit on Sky News, BBC News, Times Radio and TalkRadio, Ria is in demand for both her scientific insight, confident delivery and biting wit.
Ria is a regular host on Steph’s Packed Lunch (C4) and host of the first all-female topical news show Yesterday, Today & The Day Before (Comedy Central).
(rialina.com)

MC: Alistair Barrie
'A no-frills master of his craft' ★★★★★ The Scotsman
Alistair Barrie is one of the top headliners on the international comedy circuit.
He has performed in over 40 countries including acclaimed performances in Australia, Cape Town, Mumbai, New Zealand and the legendary Comedy Cellar in New York, as well as Hertford Theatre.
Alistair has also written for most of the major TV and radio networks and a number of other comedians.

Please contact a member of our team on box.office@hertfordtheatre.com or call 01992 531500 at least 72hrs before your desired event.